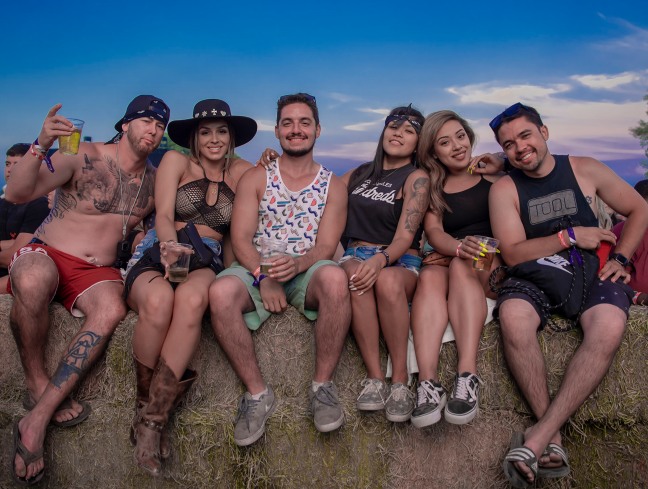 Tailgate Fest is unique because it is a festival run predominantly by women, from organizers Melissa Carbone and Alyson Richards, to the all female team at Mason Jar Media, and even the ladies behind ‘Bev’, who provided the delicious Rose libations. While we stood in awe at all that this festival stands for, the majority of festival attendees were unaware and frankly didn’t care, who was in charge of throwing this “kick ass” party.  One attendee said, “It’s great that a female company is putting on this show, but if people are having fun, feeling safe and there’s great music, they won’t care about what sex is running the show.”

And throughout the weekend, festival attendees were definitely treated to great country music.  Brantley Gilbert and Brett Eldredge, closed out each night, respectively, while RaeLynn, Lee Brice, Clint Black, Lindsay Ell and others, took to the stage and entertained the thousands of fans.  Some fans watched in traditional festival standing-room fashion, from the pit or general admission, while others chose to party from the tailgate of their trucks.

As if those options weren’t enough, Tailgate Fest also offered attendees the opportunity to view the concert poolside by way of VIP Boots and Bikinis.  This experience allowed you sit in a personal cabana, or watch the show, while relaxing in an above ground pool.  The VIP Boots & Bikinis option included private servers, floaties, photo-ops and was one of the closest locations to the stage.  To say, this location was a favorite of our coverage team, is an understatement.  Experiencing the VIP Boots & Bikinis‘ personalized service, proximity to the stage and having a chance to cool off; all while enjoying great music, hardly seemed like “work” to us.

Not to be out done, the Tailgating campground had its own perks, which included guest appearances by Brantley Gilbert, Hardy and Cody Allen, host of CMT’s Top 20 Countdown.   Tailgate staff walked the campgrounds upgrading wristbands, giving away Wyld Gear coolers and Meet & Greets with artists.  Bev, one of the festival sponsors, roamed the campground giving away free samples of their drinks to fans of legal drinking age.  If you were looking for a party, the Tailgating campground was definitely the place to be.

To put it frankly, last weekend was definitely one to remember and all in all Tailgate Fest is by far one of the most fan friendly festivals, we have ever been a part of.  From pop-up guest appearances, to giveaways, to the overall fun factor, Tailgate Fest definitely has the right to use the hashtag #BestWeekendEver.

For more information on Tailgate Fest, go to www.LATailgateFest.com