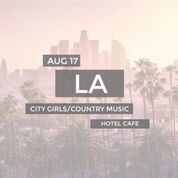 City Girls/Country Music (CGCM) is a community of women who create country, americana, and folk music in cities around the world and on August 17, they will kick off their North American tour with a stop at Hotel Cafe in Los Angeles.  The tour will include stops in Boston and New York.

CGCM was founded by the talented singer, songwriter and pianest Cindy Jollotta.  Cindy experienced first hand the struggles of being a woman in the music industry and courageously decided to do something abou it.  After noticing festival after festival, where female artists were sparse or not present at all, she started CGCM to create a more opportunities specifically for women to play, but also more opportunities for country fans living in big cities to discover new stars and to see their favorite genre of music performed live – close to home.

The show on August 17 will feature artists Leigh Madison, Courtney Cowart, Drew & Ket and the Queen herself, Cindy Jollotta.  This show will give audiences the opportunity to enjoy great music in an intimate setting and a will support female artists in a cause that has been a longtime coming.  We anticipate that this event will be the first of many and the first of many steps towards empowering woman artists.

Below are bios of the artists that will perform at the Los Angeles Show:

Leigh Madison grew up in Oklahoma and has been in LA for her whole adult life. She has lived in her car, lived like a queen, and lived every way in between. Leigh has played in bands up and down Sunset Blvd. and starred opposite Neil Patrick Harris in the Broadway show RENT, as well as singing on national and international commercials.
Leigh is a single mother in LA “which isn’t easy, folks” and has a passion for Country Music which stands for everything she valued and cherishes in her life: family, love, faith, tradition, friendships, community, speaking truth, being genuine, having fun and staying grounded by & connected to her roots.
Courtney Cowart is a singer-songwriter and Tennessee native. She was the lead singer of two NYC-based bands before her recent move to LA. She can be seen highlighting in an all-girls bluegrass band, ‘The Snowy Mountain Sisters’, and the Country Western band, ‘The Island City Outlaws’. She is a regular at LIC Bar, and has performed at The Duplex and Red Room. Courtney’s most recent theatrical role was in the Off-Broadway musical ‘Boys Will Be Boys’ (NYMF), and has featured in several Cabarets, including Bucket List Theatre at LA’s Three Doors and Theatre 40. She also makes appearances with 2Scoops, Sherry Duvall-Covington and Guilty Pleasures by Too Legit to Quit Productions in NYC. Her music incorporates elements of pop, folk, country and blues, and she is currently working on her first studio album. Courtney is thrilled to be performing with the amazing women of City Girls/ Country Music!
Drew and Ket are a pop country duo based out of Los Angeles, CA.  Fresh melodies, raw harmonies, and honest storytelling draw and captivate their audience.  The two connected over a passion for writing songs meant to inspire listeners to push the boundaries of the impossible and set off pursuing their own individual dreams.  A love story all their own, the lyrics and melodies they create bleed the adventure and struggles they have shared together.  Drew and Ket are thrilled to support women in country and so thankful to City Girls Country Music for the opportunity to be a part of this movement.
Cindy Jollotta is a singer-songwriter based in Los Angeles. She has performed all around the United States (Stagecoach Festival, House of Blues, Las Vegas Country Saloon, etc.) with her former band.  Now stepping our on her own, Cindy has performed around Europe and the US and is about to embark on a tour from California to Alaska.

Her sound combines her love of honky-tonk with her roots in the alternative rock world. It’s Dark Country meets Folk Pop. Dixie Chicks meets Amy Lee. She aims to deliver raw emotion with a touch of whimsy in a style that combines dramatic arrangements and playful touches.