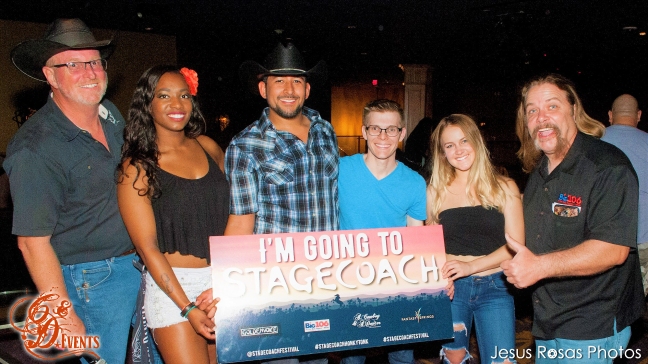 The Road to Stagecoach concluded yesterday with the 2018 Stagecoach Line Dance Competition.  For the fourth year in a row the competition was held at Fantasy Springs Casino’s Lit Lounge.  Fantasy Springs Resort and Casino has been a sponsor of the line dance competition for the past four years and continues to be one of the corporate sponsors at Stagecoach Country Music Festival.  Hosts and DJs for the competition were local radio celebrities, Big John Miller, from Cowboy and A Dancer Entertainment and Randy Houston from KPLM The BIG 106.

Every year judges from the Stagecoach Honkytonk hold weekly competitions at different country music bars throughout Southern California.  The final stop is always Indio, California, the host city for Stagecoach.

This year over 30 competitors danced for a chance to win Stagecoach Festival wristbands and an opportunity to be on the prestigious Stagecoach Honkytonk Dance Team.  The judges had a difficult time selecting this year’s winners and were forced to hold a “dance off” to determine who would walk away with the wristbands and an opportunity to be selected to the dance team.  Five women and four men were selected to compete in the dance off where only two winners from each gender were selected.

After over 20 minutes of deliberation, the judges announced the four luck winners to the hundreds of people awaiting the results.  The winners were presented their prize by Big John Miller and proceeded to pose for pictures with friends, family and members of the media.

The line dance competition was only the beginning of the night’s festivities as Big John Miller and Randy Houston kept the crowd dancing late into the night.  before the night concluded, Big John raffled off his very own pair of Stagecoach wristbands.  His generosity brought a standing ovation from the everyone in attendance.

The month long event leading up to Stagecoach was once again a success.  By bringing in over 2,000 people into Lit Lounge during the month of March, Stagecoach has established itself as the premier music festival Coachella Valley residents enjoy the most.  It has also proven that in the desert country music has a very dedicated and loyal fan base.