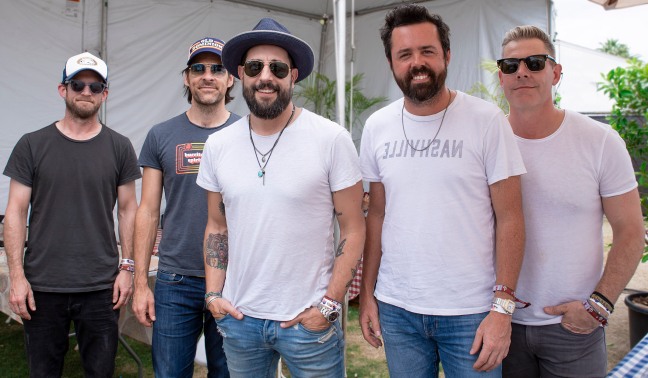 On Friday, December 6, Old Dominion performed at the Fantasy Springs Events Center to a sold out crowd… and they put on one of the best live performances, we have ever seen!

Old Dominion was on the home stretch of their “Make It Sweet” tour and had just finished two nights in Las Vegas.  The band had every reason to mail in a performance; tail end of their tour, smaller venue, day after Vegas… but instead, they demonstrated why they are the ACM Vocal Group of the Year.

The band came out with a style and energy, that was contagious.  They had the crowd on their feet and singing along to their hits, most of the night.  The only time everyone sat down was when Matthew, Trevor and Brad, did a brief history of some of the songs they had written for other artists.  Because of that night’s layout at the Fantasy Springs Events Center, the “oohs” and “awes” could be heard from the crowd as the band performed some songs made famous by Kenny Chesney, Luke Bryan, Sam Hunt and Michael Ray.  It was easlily the highlight of the evening.

The band finished the night performing songs from their latest, self-titled album, which included “One Man Band“, a song that the next day would be announced as their latest #1.

The band will continue continue to tour into 2020 with the “We Are Old Dominion Tour” which will take them into Canada, then they’ll join up with their friend Kenny Chesneyon the “Chillaxification” tour.  The next time Old Dominion will be in Southern California will be on August 1st at SoFi Stadium.  Be sure you get your tickets when they come to your town… you will not  be dissapointed.

For more info on Old Dominion, check out www.WeAreOldDominion.com

To book your next getaway go to www.FantasySpringsResort.com