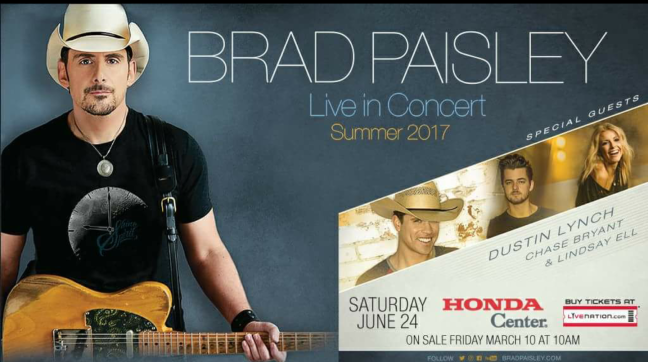 Brad Paisley is currently on tour… around the world!  Brad Paisley’s Life Amplified World Tour, is performing in sold out venues in every city he goes and this summer his tour will hit California.

On June 16, Brad will perform at The Toyota Amphitheater in Sacramento, CA on his first of four stops in The Golden State.

Next, he will travel to the city of Mountain View on June 17 and will perform at The Shoreline Amphitheater, before taking a few days off and traveling to Southern California.

While in SoCal, he will perform on June 23 at The Mattress Firm Amphitheater in San Diego California and The Honda Center in Anaheim on June 24.

If previous performances are any indication, Brad Paisley promises to entertain his fans with his amazing guitar playing abilities; his witty sense of humor and he promises to bring his very best every single night!

We will be sure to catch at least one performance while he’s in SoCal and we encourage you to do the same!